- Christian Association for the Psychology of Religion Limited 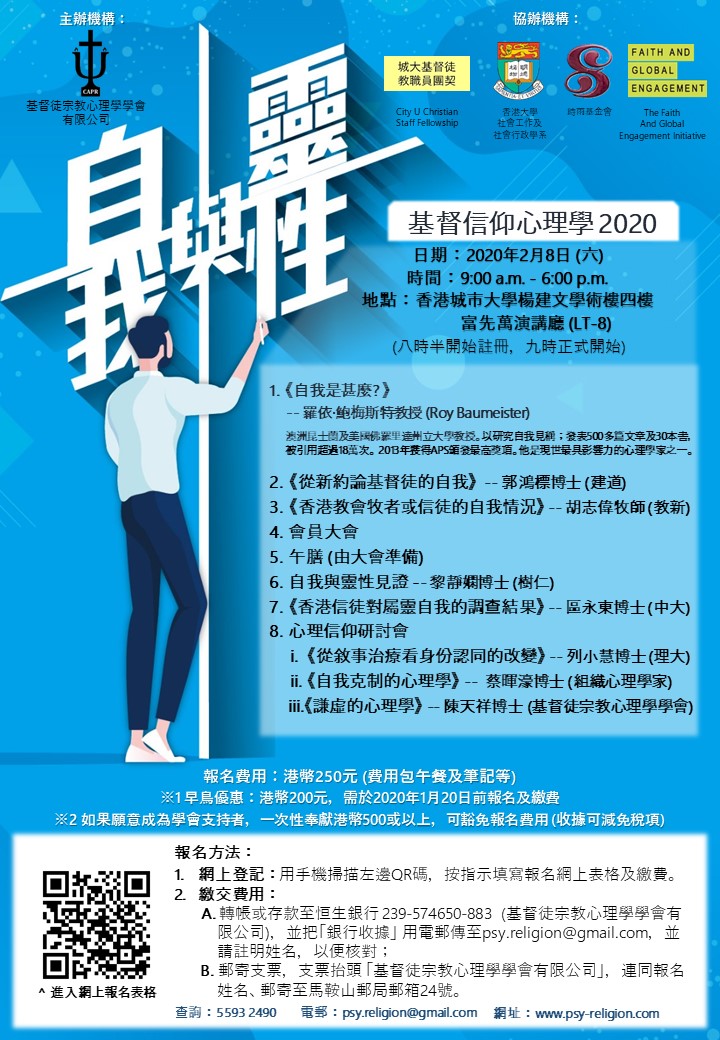 "Self” is an important theme in the Bible. Abram was named Abraham to start off a new identity as he believed in God’s promise. Jesus Christ humbled himself, standing in the position of sinners, to achieve salvation. When people become Christians, they change their identity from sinners to sons of God. Believers can overcome sinful nature in keeping the identity of uniting with Christ in death and resurrection (Rom. 6:1-14). Obviously, there is a close relationship between self and spirituality. Among the more obvious lessons in the Bible on self are Christian identity, self-control, and humility. Sure, the Bible tells Christians what to do, but not how to achieve them in detail. As a result, many Christians may not be able to behave in accordance with their Christian identity, may lose control, and maybe egoistic. Christians may need to know what self is, the Biblical teachings on self, the departure of our state from the Bible teachings, and the psychological variables that we need to steer for achieving the identity, self-control, and humility as described in the Bible. For this reason, the Christian Association for the Psychology of Religion Limited collaborates with a number of institutions, including the Department of Social Work and Social Administration, and Faith and Global Engagement at HKU, to organize a conference on "Self and Spirituality" at City University Campus.

At the annual meeting, we have invited Professor Baumeister, an internationally renowned social psychologist, to give a lecture in English on "What is self?" He has engaged in social psychology research for 40 years to study "self", has published about 30 books and more than 500 articles, and has been cited nearly 180,000 times in the research literature. He has also been praised by the scientific publishing community (ISI) as a highly cited research scholar in 2003 and 2014. In addition, we have invited theologian, pastor and psychologists to integrate the teachings of the Bible with psychology and discuss how Christians can live out their identity, self-control, and humility as described in the Bible. The first talk of the conference, "What is Self?" is in English; the others are in Cantonese.

For more details, please refer to the poster.